Is Live Streaming the New Frontier of E-commerce?

By Rita Yang and Hans Tung
Acknowledgment
This piece is based on internal research on live streaming e-commerce in China conducted by Erica Yu and Neal Ren. Robin Li, Christine Hinton in the U.S., Madhu Yalamarthi in India, and Dimitra Taslim in Singapore contributed to the article. All people listed are GGV colleagues. Kim Kardashian made an appearance on Viya’s live streaming channel selling her fragrance during Taobao’s double 11 shopping festival in 2019.

What is Live Streaming e-Commerce?

If you don’t know who Viya is, you should.

She is an internet celebrity in China who sells via live streaming on Taobao. In 2019, she sold $2.8 billion worth of goods. That is more than $5,000 per minute, a number that even China’s No.1 luxury shopping center located in central Beijing can only wish for.

Viya is so good at moving sales that Kim Kardashian shouted “OMG, it’s crazy” while debuting her fragrance on channel. Viya sold out all 15,000 bottles in 1 minute.

The massive success of Viya is made possible by Alibaba (a parent company owns Taobao, former GGV portfolio). She was an ordinary online shop owner until spotted and invited by Taobao to try live streaming. Beyond the charm and salesmanship, she is a symbol of the booming live streaming e-commerce in China, which exploded in 2019 and went mainstream during the height of COVID-19.

On top of demonstrating products, live streamers answer questions in real time, offer exclusive coupons, and lucky draws throughout the session. From beautifully displayed samples to banter at the checkout counter, it is as close to a shopping mall experience as we can have online.

Before COVID-19, live streaming channels were mostly hosted by professional salespeople. The outbreak of the coronavirus dramatically widened the range of hosts and product categories. From the chairman of Ctrip (the largest OTA in Asia) selling hotel rooms to court clerks selling foreclosed real estate in Ningbo, maybe the right question to ask now is who’s NOT selling through live streaming. By April of this year, 1 out of every 5 people in China had watched other people selling on live streaming. 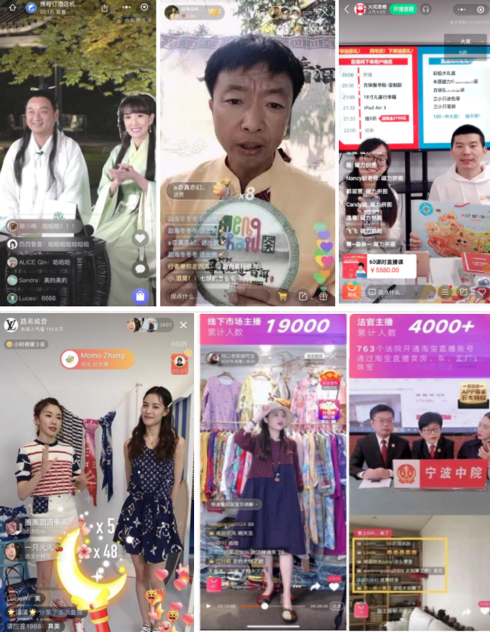 Taobao launched the live streaming feature four years ago, now dominating the market with $28 billion in sales in 2019. This number grew 150% year-over-year between 2017 to 2019. Despite the staggering growth, it only counts for 3% of Taobao’s entire GMV. Less than 30% of its merchants have tried the new way of selling, according to an executive at a data company we interviewed.

The huge potential of this market attracted more players to join the race. Two emerging formidable rivals are Kuaishou and Douyin, the most popular short video apps in China.

Douyin is TikTok’s Chinese version owned by the same parent company Bytedance (a GGV portfolio). Kuaishou is its main rival in the country. Both have enjoyed meteoric growth for the past three years. In 2019, a third of China’s population spent at least 20 minutes on one of these two platforms every day. That’s why many brands and merchants use Kuaishou and Douyin to direct traffic to Taobao, even though these transactions pale in comparison with Taobao’s native live streaming channels.

Among China’s massive $1.5 trillion e-commerce market, only $61 billion (4%) was sold through live streaming in 2019. That number is projected to double in 2020, reaching $120 billion.  Kuaishou and Douyin are vying for a bigger slice of the pie, aiming at a GMV in the $20-40 billion range for 2020. Both have launched their own e-commerce function that enable merchants to sell without leaving the app. These aggressive targets suggest that the e-commerce competition in China will only intensify. Alibaba highlighted live streaming as “one of the fastest-growing and effective selling formats on its China retail marketplaces” in its earnings report.

Our view is that Taobao will continue to hold its leading position while Kuaishou and Douyin fight over second place. As the world has figured out now, e-commerce is much more than eyeballs and influencers. It is one thing to build a following, another to ship orders on time.

It is no accident that these three big companies decided to up their stakes in live streaming at the same time. After 20 years of explosive growth, China’s mobile user numbers have plateaued. By scaling live streaming e-commerce that collapses all the steps of a classic marketing funnel into a few entertaining minutes on your phone, internet companies can get consumers to spend more time and money in their apps.

Should Brands Go All In?

Similar to how SARS accelerated shopping online in China, COVID-19 prompted this gold rush into live streaming e-commerce. Some people think of it as the new norm for online shopping. Others have shrugged it off as a marketing gimmick that will blow over.

For consumers, besides the shoppertainment nature of live streaming, products sold by popular live streamers are usually something they are generally interested in and significantly cheaper given the bargaining power big-name live streamers have over their suppliers.

For brands, this new form of e-commerce provides some obvious advantages, including better data about buying behavior, higher conversion rates, lower marketing costs, and access to new markets. But there are also hidden traps.

An apparel merchant (one of the top categories on Taobao Live) told Chinese media that their conversion rate for their live streaming sessions was somewhere between 7%-10%, higher than the 5% of classic website display of images and text. Taobao, Kuaishou, and Douyin have launched different levels of subsidies for brands that are yet to start live stream to incentivize adoption. If you are among the first batch of brands in your category to get on live streaming, you will likely get some free traffic.

One thing brands need to be aware of is the high return rate and reverse logistic cost that comes with it. The average return rate on Taobao is somewhere between 20%-30% (a number floated among merchants). The return rate in live streaming will only be higher given the impulsive nature of live shopping.

Is live streaming the most efficient way to aggregate demand in your category? How compatible is your supply chain with the model? Brands need to think it through before jumping in.

Can it Go Global? If we plot live streaming into China’s e-commerce evolution, it is essentially another group buy model where demands are aggregated exponentially. Pinduoduo’s team purchase relies on consumers’ social networks in WeChat. Shihuituan’s community group buy leverages the social connections of people who live in the same residential areas. It is born out of a few market conditions that are unique to China.

Firstly, Chinese consumers are very used to live streaming and e-commerce. Half of all live streaming users in China have also watched it for shopping. Some 37% of all e-commerce consumers have also tried out live streaming. Secondly, incubating and promoting live streamers is an established business, with first-generation live streaming companies like YY.com (a GGV portfolio) being around for nearly a decade. Some marketing agencies now provide live streaming services for brands were also the incubators for the first-generation of internet influencers in China. Finally, the e-commerce boom in China has enabled seamless collaboration between manufacturers and merchants. They can adjust very fast to consumers’ changing demands. Declining export due to COVID-19 is propelling more manufacturers to turn to e-commerce merchants for the canceled orders of oversea brands.

With e-commerce’s spike in the U.S. because of COVID-19, will live streaming also take off in the world’s largest consumer market?

While we’ve seen signs of live streaming gaining traction as part of the stay-at-home economy, we don’t see it becoming a growth driver for e-commerce in the U.S. Source: Gartner INSIGHT REPORT: WHAT WESTERN BRANDS CAN LEARN FROM THE CHINA EXPLOSION IN LIVESTREAMING DURING COVID-19, April 24, 2020

For live streaming e-commerce to take off, you need consumers motivated enough to watch what is essentially an informercial, live streamers who can keep an audience by selling, and a platform for all of those transactions to happen.

American consumers are arguably the most sophisticated shoppers in the world and need less help in deciding what to buy. With an established consumer protection system, what you see is mostly what you get. The trust between sellers and buyers is higher. Watching product demonstrations and asking questions in real time makes less of a difference compared to the classic product display.

Further, celebrity influencers from YouTube or Instagram identify themselves as creators instead of resellers. The end goal for them is often to launch their own brands instead of selling other people’s products.

Some might argue that both consumers and influencers can be incentivized if big tech companies decide to go all in. But we haven’t seen that in the U.S. yet.

Amazon launched Amazon Live in February 2019. The reviews for its creator version on the App Store are rather underwhelming, which speaks to the place it had on Amazon’s priority list. Because of the COVID-19 acceleration of e-commerce demand, Amazon is too busy fulfilling orders than inventing new ways for merchants to sell.

In the recent Facebook Shops launch, Mark Zuckerberg said the team is testing the live shopping feature and will roll out soon. It’s an important step for Facebook’s endeavor to diversify its revenue that is too reliant on advertising.

From what we have heard, Facebook saw huge potential for this feature to work well in emerging markets like Thailand, India, and Indonesia, where trust is still an issue, not so much for the US. Its recent investments in India’s Reliance Jio and Indonesia’s Gojek are strong indicators of its ambition in social e-commerce in India and Southeast Asia.

Facebook is not alone. Local e-commerce platforms in Southeast Asia, like Lazada, Tokopedia and Shopee have all launched the live streaming feature. Tech in Asia reported Shopee Live got 120 million views from Indonesia in April 2020. Total hours streamed rose by up to 200% in Singapore and Malaysia from February to June.

It looks like live streaming e-commerce has a much bigger chance to take off in the emerging markets than the US. We are intrigued to see how it will play out.